The Case for Change

Towards a New Governance Model

The sustainability of our native forests is important to us all. Native forests have many values which may be broadly grouped as environmental, economic and social (refer Figure 1). Sustainable management of native forests occurs where multiple forest values are simultaneously maintained and balanced.

As living entities, our native forests must be actively managed to adapt and face threats like fire, pests, weeds and climate change. The key to the sustainable management of native forests is the active balancing of social, environmental and economic values. Yet for some time now, the management of our forests and parks has been out of balance.

Native forests and their values are dynamic. Native forests have evolved with fire, drought and flooding rains. Today’s regrowth forests are tomorrow’s old growth forest and vice versa. We should resist the temptation to think of native forest as static museums with values that can be locked up and protected forever. To effectively manage and balance native forest values requires an active and adaptive approach.

In New South Wales, management of forests and parks is based on a land tenure model. Tenure is a legal concept rather than a best-practice management method. It means that public native forests have been classified as National Parks, State Forests or Crown Land.

Tenure is a legal-political construct which is used to allocate native forest land use according to environmental, economic and social priorities. Within New South Wales there are 22.28 million hectares of land that supports native forest1.

This forest is spread over publicly owned land, privately owned land and leasehold land. The breakup of native forest areas by broad tenure category is detailed at Figure 3.

The tenure model has enabled scientific understanding of forest values to be gained through specialised institutions. Historically, this has worked well where population pressures have been low and where there has been limited demand to balance competing values.

Figure 4 shows the extent of native vegetation in NSW by broad tenure type. 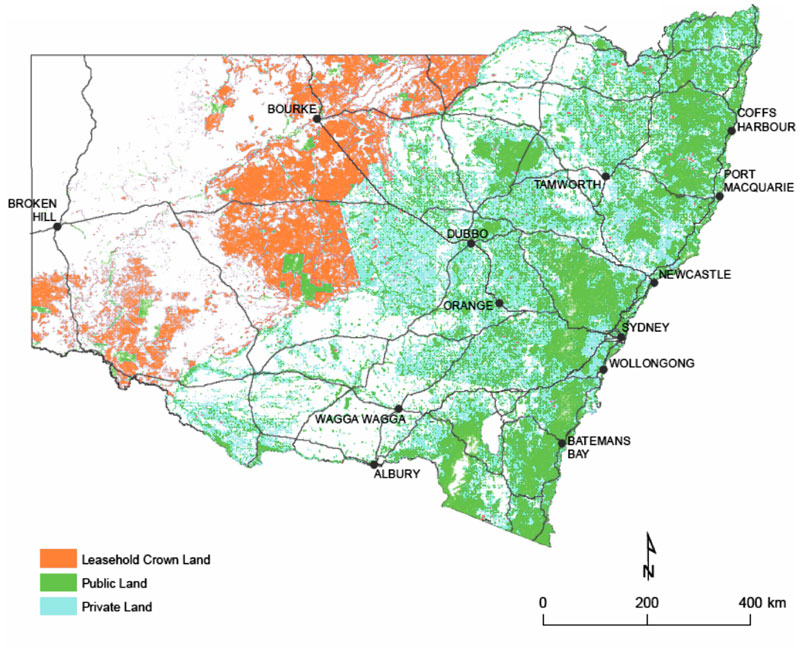 Under the tenure model, independent government agencies were created to manage discrete land parcels that were defined by their legal tenure. The agencies developed their own cultures and values and this led to a diversity of management approaches.

With each tenure type governed and regulated differently, there is no coordinated response to managing common threats to forests, particularly invasive species and fire.

NSW native forests are now governed by over 50 separate Acts of Parliament and five State ministerial portfolios. These portfolios are managed and regulated by a dozen different government bodies. This complexity gives rise to functional duplication and large differences in the amount and quality of information that is collected and used for decision making. This framework, not surprisingly, tends to inhibit transparency and accountability.

Unlike the built environment, the managers of the State’s natural capital lack credible accounting methodologies to monitor and value their natural assets and justify investment in R&D, repairs and maintenance. This absence of standardised financial and management accounts is currently preventing government from gaining an objective overview of the state of the forests.

Through preventative measures like ecological thinning and fire mitigation, the timber industry can play an important role in active, adaptive management to tackle common threats across all tenure types.

High profile environmental debates in recent decades have polarised views and clouded understanding of what constitutes sustainable forest management. One political response has been to skew the allocation of public resources toward National Parks and Reserves (refer Figure 5 and Figure 6). This imbalance has led to an inefficient approach to the control and mitigation of common threats.

Figure 6 – Expenditure on Fire Management in FY2013 by public agency

Although most tenure conversions occurred from the late 1990s to the early 2000s, the charts (Figure 6 and Figure 7) below highlight the escalating cost of a tenure-based approach to conservation and timber production.

Thirdly, serious imbalances have arisen as the aims of one tenure type have been given priority over another.

The timber industry has a valid economic role to play in meeting the growing domestic demand for timber.

To be sustainable, the industry needs secure access to NSW regrowth forests, supported by a stable policy framework.

Towards a New Governance Model

How can NSW achieve balance in the delivery of environmental, social and economic values from our native forests?

A holistic approach to governance cannot focus only on the environmental values of native forests. It must also consider and be accountable for the social and economic benefits of the forests in a manner aligned with society’s expectations.

Timber NSW believes there is a compelling case to move beyond the tenure based governance model and to start focusing holistically on the common issues which threaten our native forests.

Only an overarching governing body can effectively manage the issues and major threats that are common to all tenures, as well as the diversity of public and private views, bringing these within an agreed sustainability framework.

A single governing body will be better placed to deliver more cost effective management and ensure greater consistency and balance. Through a single governance model there will also be an opportunity to improve accountability through a standardised cross-tenure monitoring and reporting system.

Such an approach is not achievable without making changes to the state’s existing tenure based governance system. Reducing the number of legal instruments pertaining to native forests and the regulatory bodies which oversee them is a critical first step.

Timber NSW seeks a forest governance model which provides for sustainable, active and adaptive management
across all tenures.

As a matter of priority, Timber NSW calls on the New South Wales government to: